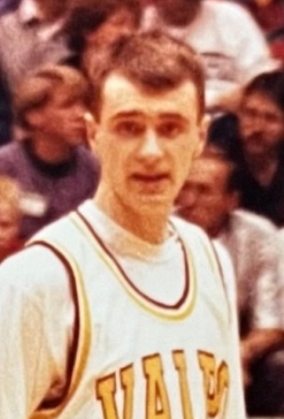 David Redmon 50 passed away at his home in Columbus, Ohio on Jan 15,2023. David was a supervisor for ADT for the past 9 years. He is survived by his son, Tommy 13, of Manteno, Illinois;  his mother, Joyce (Bill) of Grove City, Ohio; his brother, Mark; his step brother, Curtis Robinson; his nephew. Curtis Redmon of Portage; and two great nieces, Layla and Ava. Also, many cousins in the Valparaiso and Columbus area. He was proceeded in death by his father, Thomas Redmon.
David attended Valparaiso High School where he lived to play basketball. He was a true Hoosier. After high school he went to Little Rock Arkansas for his first year of college. He then transferred to Valparaiso University where he again played for his hometown alongside his good friends Robby Cavanaugh and Casey Schmidt. He was inducted into the VU hall of fame in 2004. He called the years at VU “The Glory Days” because he enjoyed it so much. After college he went to Poland and played professionally for 2 years.
A Memorial Gathering will be held February 11, 2023 from 11:00 AM – 1:00 PM at Moeller Funeral Home 104 Roosevelt Rd., Valparaiso with a Memorial Service beginning at 1:00 PM.  In lieu of flowers, memorials are requested in David’s memory to the Boys & Girls Club in Valparaiso.

As a young boy growing up in Valpo, I idolized David and his game. That guy was tough as nails and could shoot from anywhere on the floor. My condolence to his family, RIP David.  -Chad White

I knew David from our days in elementary school. We used to play baseball, kickball, football, and basketball together. Those were great times and fun days. I remember David as always being nice and easy to talk with. My thoughts are with his family, especially his brother Mark.  -Marcus Powers