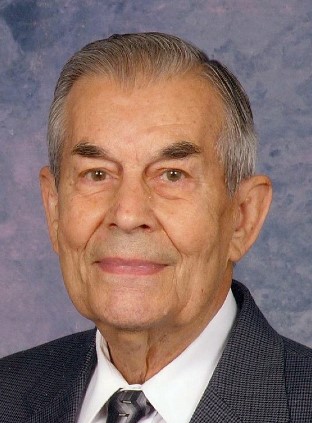 Edward J. Pakan, 99, of Valparaiso formerly of Highland went to be with his Creator on December 5, 2022. He was born September 30, 1923, in Hammond to Paul and Emilia (Jurak) Pakan. He is survived by Dorothy B. (Mertel) Pakan, his wife of 74 years, three daughters: Dorothy A. Pakan, Susan (Gary) Brown, Sharon (Steve) Cholewa, and grandchildren Christopher and Emily Brown. He was preceded in death by brother Alfred Pakan and sister Mildred (Pakan) Stewart.
Edward was baptized on October 20, 1923, and confirmed in 1937 at St. Paul Lutheran Church, Whiting. He graduated from Whiting High School and proudly served in WW II Ordnance Automotive in the 631st Maintenance Company. His battles and campaigns included Normandy, Northern France and Rhineland. Upon his return to the U.S., he was employed at Union Carbide for almost 30 years as apprentice and then journeyman machinist.  Later he worked at Pullman Standard in Hammond and South Chicago plants, building and maintaining the Pullman cars until the plants closed. He installed the last bolt in the last Pullman car to be made. His last machinist position was at Konrady Plastics in Gary and Portage where he trained others to cut plastics at close tolerances as was necessary for many orders.
Edward loved his Lord and his church. He was a member of Redeemer Lutheran Church in Highland ever since the early 1950’s and helped build the current structure dedicated in 1956. Over the years he served in many capacities, among them choir member, Sunday School teacher and superintendent, greeter and elder.
Along with working by day and raising a family, Ed also logged in countless hours on stage. Shortly after his Army discharge, he was contacted by a local band leader, Johnny Kay, with whom he performed at local jazz and big band hot spots three to four nights a week. He remained a musician his entire life playing clarinet, saxophone, harmonica and leading vocals with several bands. He helped found The Blue Tones, a popular special events band for 45 years.  From 2008-2016 he led the opening act at Highland’s July Festival.
A memorial service will be held Saturday, January 7th at Trinity Lutheran Church, 201 N. Washington St, Valparaiso beginning at 11:00 a.m. with visitation from 10 – 11 a.m. Memorial donations may be made to Redeemer Lutheran Church, Highland, Indiana.

I have known Ed for twenty years or more. We were both members of AFM, Musicians Guild, Local 203, Hammond, Indiana, where we both were introduced, and became close friends since. He was in Benny G's band then, and when Benny wasn't able to perform, I asked him to come into my band, the " Pete Carlo 3 ". Ed and I were together for many years, performing in Indiana and Illinois, and wherever the wind would take us. Then after the gig at the Garden House, he said to me he didn't have enough wind to continue performing. We were both really disappointed, but remained close and in touch ever since. ...... I could always depend on Ed, weather it was performance or repair, or information. Ed would be packed up and ready to leave after the gigs, but would stay another half hour, helping me pack up. ...... I'll never forget him. God bless you, Ed 🙏. Your forever friend, ...... Pete Relli