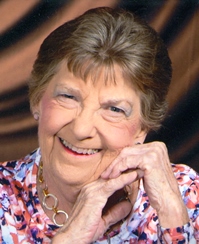 Eva Leah Hood, 86, formerly of Valparaiso passed away Sunday, February 20, 2022 in Michigan City. She was born October 7, 1935 in Gary, IN to John & Elsie (Fifield) Dacey, II. Eva was a longtime teller & bookkeeper with Indiana Federal Savings & Loan in Valparaiso where she raised her family before retiring to Lake Placid Florida where she was an active member of Trinity Lutheran Church.

A visitation will be held Thursday, March 3rd from 1 – 2 pm at Moeller Funeral Home, Valparaiso with memorial service beginning at 2:00 pm and entombment to follow at Graceland Mausoleum. Memorial donations may be made to the American Lung Association.