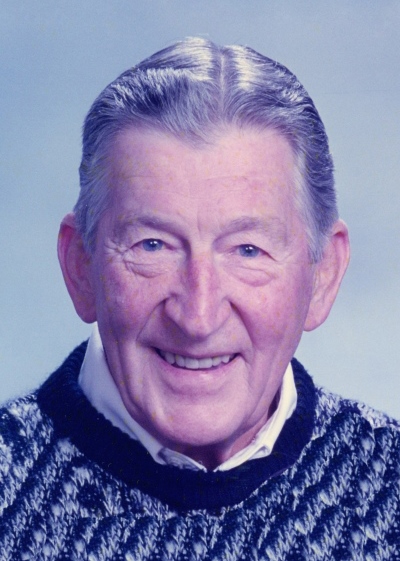 Fred William Morgart, 93 of Kouts, entered into the presence of his Savior, Jesus, on Thursday, May 12, 2022. He was born January 7, 1929 in Windber, PA to Charles Edward Morgart and Vera (Price) Morgart. Fred proudly served in the United States Army from 1950-1952, where he was stationed in Germany. He retired from Bethlehem Steel after 38 years of service. Fred was a member of the First Presbyterian Church of Kouts where he served as church treasurer for many years, and was also a member of the American Legion. He was a talented woodworker, and enjoyed bowling, golfing, World War II history, and aircraft. Fred was a generous and devoted family man who loved his grandchildren deeply. He will be dearly missed.
On May 16, 1953 in Johnstown, PA, Fred married Helen Adams, who preceded him in death in 2007. He is survived by their sons: Dennis (Barbara) Morgart of Tucson, AZ and John (Patricia) Morgart of Kouts, IN; grandchildren: Arianna Morgart of Colorado Springs, CO, Reid (Olivia) Morgart of Tucson, AZ, Matthew (Abby) Morgart of Greenbrier, AR, Timothy Morgart of Kouts, IN; and brother, James Alan (Sandra) Morgart of New Paris, PA. He was preceded in death by his parents; brother, Gerald Morgart; and granddaughter, Brenna Morgart.
A visitation will be held on Wednesday, May 18, 2022 from 11:00 a.m. – 1:00 p.m. at the First Presbyterian Church of Kouts, 195 E. 700 S., Kouts, IN. The funeral service will begin at 1:00 p.m. with burial to follow at Graceland Cemetery, Kouts. Memorial donations may be made in Fred’s name to Dunes Hospice.