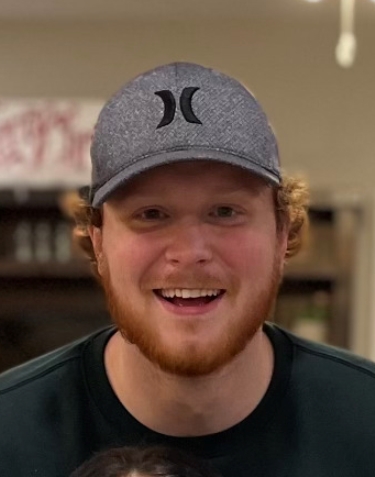 Garrett “G” Hewlett, lover of life, sweet talker, secret keeper, advisor, athlete, foodie, hustler, and a friend to all, passed away unexpectedly Sunday, August 14, 2022, at the age of 23.

Garrett grew up in rural Indiana and with that came passion for football.  He loved everything about the competitive sport:  the toughness of it all, the camaraderie, winning, and even losing if they played a good game.  His football career continued throughout his high school years at South Central, and he even set a few school records, earning a place on the Indiana All State Football Team.

Garrett was also a force to be reckoned with on the basketball court, and, of course, he had some signature moves, like his famous head shake fake.  As he honed in on his skills, Garrett became one of the best ball handlers his father had the pleasure to be on the court with.  There have been many laughs (and frustrations) because Garrett was a puppet master; he would lead his father around the court until he broke his ankles.  In his last weeks you could still catch Garrett slinging mad skills on the court at Tower Park.

As life proceeded, Garrett found his life partner in Sky (aka “Mama”) and together they created their beautiful daughter, Sage (aka “Little Mama.”)  In the short time they had together, they experienced a lifetime of love and memories that will never be forgotten.  They enjoyed anything and everything as long as they were together.  He was her rock, her everything, and Garrett wanted nothing more than to love and provide for his family.  Often, you could find Garrett in the kitchen cooking up something good, making sure everyone was happy and fed, most times with Sage in his arms.

Garrett’s outlook on life changed when he became a father.  For most young men, being a first-time dad would be a challenge, but Garrett seemed to be a natural at it.  He could change a diaper like a pro and make his little girl giggle and scream with delight with his crazy dad antics.  He recently took her for a walk in her new shoes and he was so proud of her for not missing a step.  It was evident that she ruled his world and vice versa.

Garrett loved living in Chicago – he loved being in the action and mix of it all.  He relished the diverse culture, unique restaurants and markets, and new experiences the city always offered.  However, he believed that moving out of the city would be the best option for his family.

Garrett had many friends that he confided in and number one being his brother Vance. His brother and closest friends have shared the following:

“Garrett was one of the most selfless people I have ever met.  He had a laugh that was ridiculously contagious and his presence made a room brighter.  He was the type of guy who would give you the shirt off his back, or the last cent in his pocket.  He was the kind of person that rooted for everyone to succeed in life; he wanted the best for everyone.”

“He’s the strongest white man I ever met in my life.  He could pick me up with one arm and dribble with the other hand.  We weren’t blood, but we treated and loved each other like we were brothers.”

“Great new dad, he loved his little girl.  On paper it would seem like we had little in common, but he was truly one of my best friends; he allowed me to be his big brother.  Absolute favorite person to pay ball with.  He knew all my secrets and trusted me with his.”

“He had such an impact on me and my family that he never understood.  He was the only person I could confide in.”

“He was truly happy being a father, and I was so excited to see him be so passionate about it.”

“A great man we were all forced to look up to; a man with the strength to hold us on his back.  He was intelligent and selfless.  A great father that was calmest in the presence of his baby girl. He realized the real meaning of life and what it was all about.  Garrett brought energy greater than thunder and lightning. His laugh was one that was loud like the gods you read about in mythology.  His ability to succeed was next to the richest in the world.  The way he carried himself was most impressive.  He was a brother to me.”

“There aren’t enough words in the world to describe the impact he had on me.   I loved him like a brother.  We’ve been through things that people will never experience in their lifetime and persevered. He could do literally anything he set his mind to.”

“No matter whatever he was going through, he always kept a smile on his face.  He cared about everyone else more than himself.”

“His personality was contagious.  I loved his goofy laugh and heartfelt hugs.  We were always able to rely on each other.  Even though I was older, he was my big brother, always checked on me and made sure I was ok; he was my family.”

“Garrett had big plans and dreams he was in pursuit of.”

A private memorial service will be held at Moeller Funeral Home for immediate family members and close friends.

In lieu of flowers, a memorial donation may be made to the GoFundMe page set up for Garrett’s family at:  https://gofund.me/9a9f3ac9

Extending our deepest sympathy to you during this time. No amount of words can express the pain that you are going through. The love and joy that your child brought to us will never be forgotten. We are thinking of you and your family during this time. Garrett was a true inspiration to everyone around him. I am lucky to have known him for the time that I did. Our prayers are with you. I had just seen him at the county fair. I cannot believe that he is gone. It was a pleasure being your coach. Until we see each other again. #KingCenter  -Coach Rodney McCormick