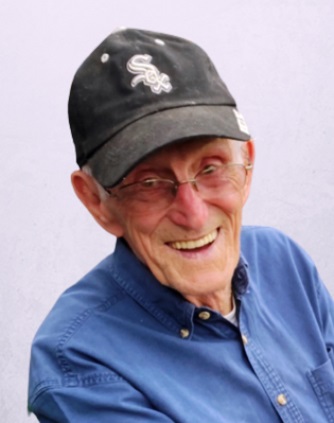 Jimmy D. Knopf, 89 of Kouts, passed away Wednesday, January 18, 2023. He was born January 19, 1933, in Crown Point to the late Walter and Florence (Frickie) Knopf. Jim graduated from Hebron High School, where he played baseball. He began his career by owning a pool hall and gas station in Hebron, before beginning his own construction company, JD Knopf Construction, and later driving bus for Kouts Schools, and retiring from Sears Hardware in Valparaiso at the age of 86. Jim was a member of the First Presbyterian Church in Valparaiso, where he participated in Bible Study. He enjoyed watching sports, especially baseball, traveling with his family, driving around town with his Chihuahuas, and spending time with his beloved grandchildren and great-grandchildren. Jim will be remembered for his quick-wit and good sense of humor. He will be dearly missed.
On April 23, 1955, Jim married Kathryn Krueger, who survives, along with their children: Jim (Gail) Knopf, Diane Smith, and Celeste (Lynn) Serrano, all of Kouts; son-in-law, Jimmy Press; grandchildren: Diana Wray, Scott (Stephanie) Wray, Amy (Chris) Lacey, Tim Knopf, Ryne (Amy) Press, Kristina (Andy) Rasala, and Katy Serrano; and great-grandchildren: Dylan, Haley, Hunter, Dominic, Drew, Dawson, Annabelle, and Levi. He was preceded in death by his daughter, Denise Press; sisters: Marge and Mary-Lou; and brother, Julian.
A visitation will be held on Friday, January 20, 2023, from 3:00 p.m. – 7:00 p.m. at Kosanke Funeral Home (new location), 309 S. Main St., Kouts. The funeral service will be held on Saturday at 11:00 a.m. at the First Presbyterian Church, 3401 N. Valparaiso St., Valparaiso, with additional visitation from 10:00 a.m. until the start of service. Burial will follow at St. Paul Lutheran Cemetery in Kouts. In lieu of flowers, memorial donations may be made to the family for the long-term care of Jim’s great-grandson, Dylan.

Sorry for your loss, He was a great man, a true inspiration, always willing to lend a hand. will not see people that were dedicated to wedding vows that they were. Loved our trips to Fl. also got 1 story to share. Kay always kept house not to warm in winter, we stopped by one time in winter and there was Jim sitting at counter with coat and hat, gloves drinking coffee and reading paper, so darn funny. You will be missed Love, John & Ruth and Family.  -JOHN d Mcgriff

So sorry to Aunt Kay and family for the loss of Uncle Jim. Gone but not forgotten. Love,  -Mark and Dawn Rathburn

We'll remember him as a cheerful fella with 'old timer' stories of people Roy and he knew.  -Roy & Mary Martin

Our condolences in the loss of a great gentleman.  -Claudi & Gordon Boyd