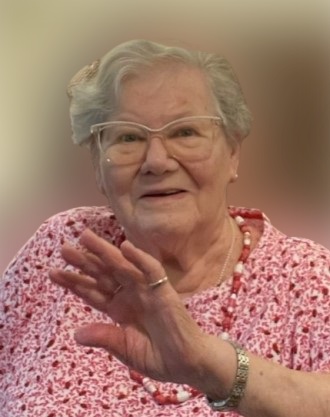 Joan Barbara Owen, 90 of Plymouth, formerly of Westville, passed away Friday, October 21, 2022. She was born January 18, 1932, in Hammond, IN to Delbert and Mildred (Linnemann) Ragle. Joan graduated from Clinton Township High School in 1950 and St. Margaret School of Nursing in Hammond in 1953.  Joan married Howard Owen on August 9, 1953, within a few weeks of graduation because as a student, she was forbidden to marry while attending school. Early in their marriage, the dashing bride would talk about how she was able to travel with Howard to France while he was deployed in the Army. Karen was often reminded that she was conceived in France. Joan returned home on a troop ship to Hanna, IN, two weeks before Karen was born. This was the beginning of starting a family of 6 kids, 8 grandchildren, and a growing number of great grandchildren.
Family was everything to Joan. When not with family, she enjoyed gardening, collecting bananas, quilting, listening to the Cubs, attending birthday club, and socializing. Joan had a wonderful career delivering babies as an OB nurse at Laporte Hospital, caring for patients at Porter Memorial Hospital, and looking after students as a school nurse at South Central.
In the last 3 years, Joan moved to Miller’s Assisted Living in Plymouth, where she enjoyed new friends and especially loved the craft ladies (Karen and Sharon a.k.a. “Her favorites”). Covid created an opportunity to participate in Tuesday night Zooms with the family, where many jokes, technical difficulties, and laughs were shared.
Joan was a lifelong member of the Hanna United Methodist Church and devout in her beliefs! Her faith helped comfort her while she waited to reunite with the ones that had passed before her. She has to be having many great conversations! Joan spent a lifetime caring for other people. Joan’s presence in our lives will be greatly missed. She leaves behind a legacy of friendship, laughter, and selfless love.
Joan is survived by her children: Karen (Garry) Poe, Sharon Owen, Matthew (Hye Un) Owen, Mark (Melissa) Owen; daughter in law, Cathleen Ousley; grandchildren: Scott (Ronda) Poe, Eric (Becky) Poe, Sarah Barron, Stephanie (Andy) Meyer, Brandon Owen, Raymond (Kaitlyn) Owen, Travis Owen, and Kelsey Owen; great grandchildren: Tristen, Lauren, and Steven Poe; and sister: Jane Ragle. She was preceded in death by her father, Delbert Ragle; mother, Mildren Ragle; stepmother, Beulah Hilton Ragle; son, Michael; daughter, Kathleen; and sister, Janet Baxter.
A visitation will be held on Thursday, October 27, 2022, from 10:00 a.m. – 12:00 p.m. at the Hanna United Methodist Church, 101 W. Hopper St., Hanna, with the funeral service beginning at 12:00 p.m. Burial to follow at Hanna Cemetery.

We are so very sorry for your loss. Joan was a wonderful lady. She will be missed.  -Mary and Mike Spiess

I'm so very sorry for your loss - and so impressed with the loving family she raised and cherished. May her memory always be a blessing.  -Mary Beth Danielson

We met Joan and Howard Owen when our son became friends with Mark. We frequently commiserated with each other about all the activities those two got up during their high school years at South Central. Joan was a fellow nurse. We never worked together but were a part of the nursing family. Our paths crossed again and again. Life is funny that way. Joan lived a full, full life and was surrounded by a warm, loving family.  We will be unable to attend the service on Thursday due to a medical appointment in Fort Wayne, unless a miracle happens. Hugs to you all. May she rest in peace.  -Georgia & Bernie Van Wormr

Karen, Sharon and Family, When thinking of your Mom, the word kindness immediately comes to front of mind. Her kindness and empathy were genuine, she cherished and nurtured friendships, with these traits along with great sense of humor. She will be missed by the ladies of the "Birthday Club" and a great many others. We are truly saddened and sorry for your loss.  -Rich and Vicki Wright

I am so very sorry for your loss. Sincerest condolences to all of Joan's family and friends.  -Carole Field

I have worked with Karen for years and we retired in same year. I never met Joan but heard many stories about her. Just knowing Karen and her kindness makes it obvious how Joan raised her children. Our sincere sympathy to your family. May it give you peace knowing she is with her loved ones watching over you all.  Sincerely, Carol & Mike Bradley.

Sending love and prayers to the family on the loss of their beloved mother and grandmother.  -Marilyn Byers

Mark and missy and family, So sorry for your loss.  -John wade

I am so sorry for your loss. Joan was such a kind lady. I appreciated her taking the time to talk with me at church and show interest in my life. Her faith in God and care for my situation encouraged me during my time serving as a missionary in Macau, China. My mother always enjoyed her friendship and we will miss her.  -Linda Chipman

I am so sorry for your loss. Joan was an amazing lady and will be missed by all.. I will miss taking care of her at work she always had a smile on her face 🙂  -Stefanie Wilcox

Karen and family, I am so sorry to hear about your mom. It has been a long friendship we have had over the years as neighbors, bus riders, and me as your babysitter! Oh my the stories I could tell about those days and your piano playing. Your mom was always so calm and helpful and always had a smile on her face! She will definitely be missed by your whole family.  -Linda Mills