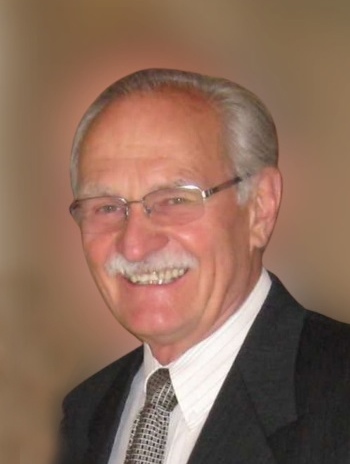 Klaus Guip, age 81, of Valparaiso, IN passed away peacefully on June 29, 2022 with his loving family by his side. He is survived by his wife, Sharon, with whom he shared a lifetime of love for more than 60 years; his daughters and sons-in-law, Colette and Doug Barker and Caroline and Eric Schrenker; his brother, Robert Peter Guip; his sister and brother-in-law Hannelore and Kenton Eldridge; his grandchildren Greg and Lauren Schrenker, Samantha Schrenker, and Benjamin Schrenker; and his nieces, nephews, and great-grandchildren. He was preceded in death by his infant son, David Cheyenne; his parents, Hermine and Robert Guip and Olga and Earl Williams; and his sister-in-law, Christa Guip.
Klaus was born in Sibiu, Romania in 1941. He moved to the beautiful village of Villach, Austria at an early age and then immigrated to the United States in the early 50s. He attended Froebel and Tolleston High Schools where he met the love of his life and future wife, Sharon Williams Guip. He attended Purdue University and earned a BS in Electrical Engineering and a Master of Science in Interdisciplinary Engineering. Later, he earned certification as a registered Professional Engineer (PE). Klaus joined United States Steel in the management training program and progressed through various management positions to Division Manager of Gary Sheet and Tin. After retiring from US Steel with 30 years of service, he served as the construction Project Manager for Chicago Cold Rolling and subsequently as their Vice President of Operations. He was promoted to General Manager of Chicago Cold Rolling when it was acquired by International Steel Group. He held various positions at Bethlehem Steel and Mittal Steel and then joined Pomini SPA as Vice President of Sales, North America and held that position for 5 years. Klaus then formed his own consulting firm, KG Engineering and Technology, and consulted up to the age of 80, primarily for SMS Group for the design, installation and operation of roll shops across the United States.
Klaus loved travelling with Sharon and the girls on cross-country road trips and family ski vacations. He and Sharon visited every state in the U.S. and 18 different countries across the globe, with Italy being their favorite. He was a loyal Bears fan - especially when Colette and Caroline worked for the team. He loved working game days and once served as Michael Jordan's bodyguard in the Skyboxes at Soldier Field! There was nothing he loved more than spending time with his family - exploring new restaurants, attending theater events, going to Bulls games during their championship run in the 90s, and hosting numerous family gatherings. He also adored all of the dogs and granddogs that were part of his life. He derived true enjoyment from taking apart, doing diagnostics, and fixing electrical and mechanical devices. There wasn't anything that Klaus couldn't fix, and his motto was...“There's never been one made!” He and Sharon were two peas in a pod, and they made the most of every moment of their 60+ years together.
His family wishes to express their sincere appreciation to the kind and compassionate angels at the VNA Hospice Center and FirstLight Home Care for their exceptional and loving care. In lieu of flowers, donations can be made in his memory to the VNA Hospice Center, 501 Marquette Street, Valparaiso, IN 46383 - www.vnanwi.org.  Klaus was loved and respected by everyone who had the privilege of knowing him, and he will be so dearly missed.
In honor of his wishes, his family will gather for a private memorial dinner to celebrate his life.

So sorry for your loss of a wonderful husband, father and grandfather. Hold on to the memories. Many prayers and much love coming your way. Love to all  -Jim & Nancy Berg