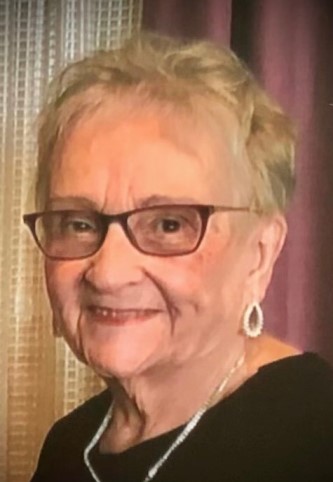 Marguerite “Marge” Leek, 83 of Wanatah, passed away peacefully on Tuesday, August 9, 2022. She was born September 14, 1938 in Gary, IN, to Clarence and Gloria (Kerger) Hartmann. She graduated from Griffith High School in 1956 and obtained her B.S. and M.S. degrees in Education from St. Francis in Fort Wayne, IN. She taught in Hammond, Rensselaer, Michigan City, and South Central Elementary in Union Mills, where she retired in 2002. Marge worked at the circulation desk at the Wanatah Public Library for 15 years. She was a proud and faithful member of Sacred Heart Catholic Church in Wanatah, where she was a Lecter and was involved in the RCIA Team and Rosary Society. She was an avid reader and will be remembered for her joyful disposition, selfless heart, kind soul, hospitable personality, and patient demeanor.
On August 15, 1970, Marge married James K. Leek, who preceded her in death in 2010. She is survived by their children: Geoffrey (Heather) Leek of Phoenix, AZ, Brian Leek of LaPorte, IN, and Elizabeth Metts of Valparaiso, IN; grandchildren: Ross, Anderson, Ryan, Alexis, Zac, Allison, and Emily; siblings: Janet (Edward) Trzupek and Jeanne (Phil) Govert; and many loving extended family members and friends. She was preceded in death by her parents, and an infant brother.
A visitation will be held on Sunday, August 14, 2022 from 1 – 4 pm at Wanatah Funeral Chapel, 309 N. Main Street. A Funeral Mass will be held on Monday at 10 am directly at Sacred Heart Catholic Church in Wanatah. Burial will follow at Sacred Heart Cemetery. In lieu of flowers, donations may be made to St. Vincent de Paul Society of Sacred Heart Church or a charity of the donor’s choice.

I’m so sorry that Marge’s earthly life has ended. May she fly with the angels. I will miss her loving compassion and spirituality. She was truly an angel on earth!  -Joanne Koss

My sympathies to Marge's family and friends. We taught together at St. Mary's School in Michigan City. She was across the hall from my room. I enjoyed her companionship and hearing about her family. She was a lovely example of living the Gospel. Even though she has earned her heavenly reward, she will be missed.  -Victoria Konkey

Much love to Jeff, Brian and Elizabeth. Your mom and I were friends for years before Jack and I moved. Her gentle spirit was probably her most impressive quality. I considered a sister. God be with all of you during this time of remembrance.  -Kathy (Jack) Garzella