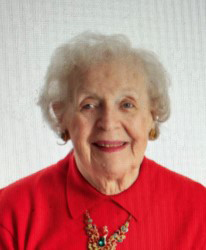 Martha M. Covert, 100 of LaPorte passed away at home just days before her 101st birthday.  She was born in Allentown, PA to August and Theresa.
She was preceded in death by her husband of sixty-one years, Benton V. Covert and her two sisters: Alice and Erna. She will be greatly missed by her loving family and the many people whose lives she had touched throughout her life.  She deeply loved and expressed gratitude for her wonderful family. Son, James and wife Nancy and grandchildren James and John of Wheaton, IL; Daughter Cynthia Hartzell of LaPorte and grandchildren Tony LoPresto (Natalya) and great granddaughter Maria, of Florida; Tracy LoPresto and great granddaughters Anna and Grace of Florida; Eric Hartzell of LaPorte, IN.  Son, Ward Covert and wife Eileen of Homer Glen, IL and grandchildren Rachel (Brian) and great-grandson James, Sara (Mike), and Drew (Lisa).
Martha earned her bachelor’s degree at Moravian College where she graduated with honors then attended William and Mary College for her master’s degree in Social Work.  In 1944 she met Benton in Richmond, VA where they were married.  Following WWII, they moved to Chicago where she worked in the foster system until starting her own family.
Martha spent many years as a stay-at-home mom raising her children in Highland Park, IL.  She was very welcoming to her children’s friends and was always ready with a batch of Kool Aid when they all gathered at the house to play.  She was an active member of the Highland Park Presbyterian Church where she taught Sunday School for years.  She also volunteered as the troop leader for both Brownies and Girl Scouts and was a den mother for Cub Scouts.  She later returned to work as a social worker for the Red Cross in Chicago, IL.
Upon retirement, Martha and Benton moved to Valparaiso, IN where they enjoyed many new friends and were very involved in the First Presbyterian Church of Valparaiso.  Following Benton’s death Martha moved to Wheaton, IL where she made more meaningful friendships.  After a brief stay at St. Paul’s Retirement Community in South Bend, the pandemic brought her to LaPorte IN where she and her daughter enjoyed spending time both together and with family.
A graveside service at Graceland Cemetery, Valparaiso will be held on Monday, June 13th at 1 pm with Carole McCollester officiating.  In lieu of flowers, send donations to Dunes Hospice.