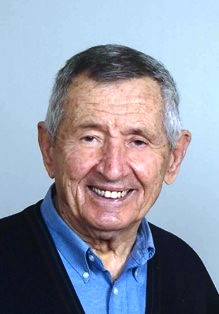 Michail C. “Mike” Hatseras, age 88, late of Valparaiso, IN, passed away June 6, 2022, after a valiant battle with 2 cancers, at his home surrounded by family. Born February 10, 1934, in Palio Kostarazi, Kastoria, Greece, he survived the destruction of his home and village in WWII and the famine and pedomazoma of the civil war that followed. Mike came to the US at age 17; initially to Atlanta, GA, then Detroit, MI, during which he served in the US Army. He married his beloved wife Vaia (nee Dollas) in Greece in October 1960, and they settled in the Greater Chicago area in 1961, near his cousins.In addition to his wife, he is survived by his 3 siblings: Dimitrios (Evanthia) Hatseras, Eftihia (the late John) Gavros, and Vasilis (Soula) Hatseras; 3 children: Angela, Eleni, and Chris (Jennifer) Hatseras; and 2 grandchildren, Zachary and Emily Hatseras. Mike was preceded in death by his parents, Christos D. and Angeliki (nee Tsotsos) Hatseras.Beloved uncle and cousin to his large extended family with whom he faithfully kept in touch all over the world, he was a devoted family man, futurist, and home improvement enthusiast with boundless energy to help friends and neighbors. Mike shared his survival tips to benefit others, had impeccable comedic timing, and kept a smile on his face while working hard at everything. He worked as an electrician for the last 40 years following years in the restaurant industry.Visitation will be Saturday, June 11, 2022 from 12:00-1:00 PM at St. Iakovos Greek Orthodox Church, 36 W. 700 N., Valparaiso, IN, 46385, with a Funeral Service beginning at 1:00 PM.  Private interment at St. Anthony’s Greek Orthodox Monastery 4784 N. St. Joseph’s Way Florence, AZ 85132.   In lieu of flowers, memorials may be made to St. Iakovos Greek Orthodox Church.