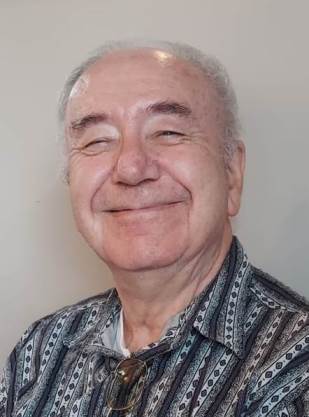 Richard Brian Lake, 74 of Kouts, passed away Sunday October 9, 2022.  He was born on April 24, 1948 to James and Margaret Lake. He graduated from Lew Wallace High School in 1966 and enlisted in the US Navy. Richard served in the Navy during the Vietnam War, 1967-1971. Right after finishing boot camp, Richard married his childhood sweetheart, Karen Ann Huffman. Richard and Karen were married on November 20, 1967. They spent almost 55 years together as husband and wife.
Richard served on the Kouts Fire Department for many years. He loved being a first responder. Through the fire department, he made lifelong friends. Richard and Karen went on many motorcycle adventures with these friends. Once their children were grown, Richard and Karen decided that they still had love to give, and decided to become foster parents. They specialized in special needs children. Through this experience, they raised over 40 foster children, and adopted 4 of these babies.
Richard passed away unexpectedly at home on Sunday, October 9, 2022. Richard was a man that cannot be replaced. He was a loving, gentle, and kind man with a great sense of humor and a giant heart. He had a sweet soul and a giving nature. Richard was a doting husband and an incredible dad. Richard devoted his life to his family. He loved shopping at Save a Lot, and going antiquing on the weekends. He also enjoyed golfing, or in his words- donating balls to the rough. His family will miss his goofy grin, contagious laughter, and whistling. He always had his juke box playing BeeGees and Eagles. Richard was a fabulous cook, with his specialties being homemade spaghetti sauce, fried catfish nuggets, and fried green tomatoes.
Richard is survived by his wife; Karen, his children; Rick Lake (Corrina), Randy Lake (Heidi), Rebecca Witkowski (Chad), Rachel Lake, and Nicholas Lake, grandchildren; Brendan, Ashlyn, Cailyn, Colton, Harper, Katherine, Hunter, and Sam, his brother; James (Sharon) Lake, and step-sisters; Irene Ditmars, Diane Klump, Karen Stern, and Elizabeth Kragh. Richard was preceded in death by his father; James Lake, mother; Margaret Kulcsar, his step-father; Paul Kulcsar, son; Isaiah Lake, daughter; Tiffany Lake, step-sister; Sue Connor, and special babies; Zachary and Karen.
Visitation will be held Thursday, October 13, 2022 from 3:00-7:00 PM at Kosanke Funeral Home 309 S. Main St. (New Location), Kouts, with a Funeral Service on Friday, October 14th at 10:30 AM.  Burial will follow at Graceland Cemetery, Kouts.

My deepest condolences to the whole family,  -Ron Witkowski