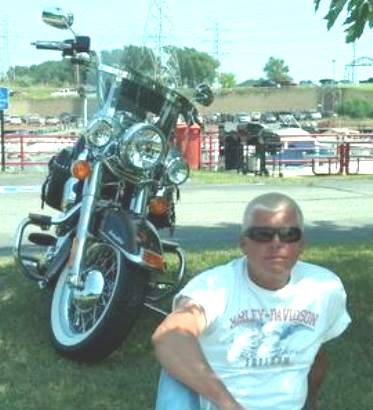 Timothy W. Cornett, 61 of Valparaiso, passed away Saturday, October 8, 2022. He was born August 13, 1961, in Benham, KY to the late Maurice and Edith (Estep) Cornett. Tim graduated from Valparaiso High School in 1979 and made his career with Asplundh Tree Experts as a General Foreman for 42 years, before his recent retirement. When he wasn’t working, Tim liked spending time playing golf, riding his Harley Davidson motorcycle, and enjoying the occasional Canadian Club Whiskey and Diet Coke. He had a good sense of humor and a gift for making others laugh. Tim loved his family deeply and will be remembered for his huge heart. Tim will be dearly missed.
On January 17, 1992 in Valparaiso, Tim married Shelly Sick, who preceded him in death in 2003. On February 29, 2012 in Michigan City, Tim married Janice Russell, who survives, along with his children: Maressa (Matt) Kwiatkowski, Erica (Ryan) Hawk, Brian (Grace) Cornett, Rachel Zaradich, Brandon (Sara) Cornett, Cole (Natalie) Cornett, Nathan (Caroline) Cornett; 14 grandchildren; 2 great-grandchildren; 1 brother, Rod Cornett; and former spouse, Cindy Peng. He was preceded in death by a brother, Jack Cornett; and sisters: Carol DeWitt, Marcie Synave, and Marie Castelein.
A visitation will be held on Wednesday, October 12, 2022, from 4:00 p.m. – 7:00 p.m. at Moeller Funeral Home, 104 Roosevelt Rd., Valparaiso.  In lieu of flowers, memorial donations may be made to the Phelan-McDermid Syndrome Foundation.

Jan, I am so sorry for your loss. You two seemed to be so happy. May God be with you in this time of sorrow.  -Annette DeRosia Chmiel

You need only look in your heart to find what is lost sending our condolences to you and your family.  -Jerry & Patty Hauber

My Prayers and Love to all Tim's Family. Tim's Dad was my Moms brother. So sad we are losing so many of our older family members. Love to all.  -Sanda Barnhill