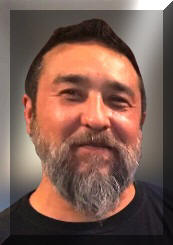 Salvador Cordero, 49 of Valparaiso, passed away after a courageous battle with cancer, Friday, February 4, 2022.  He was born December 23, 1972 in Chicago Heights, IL the son of Epifanio Cordero and Maria De La Luz Cordero Leal.  Sal had a degree in architecture design and worked for Anderson and Anderson Construction Company, Crown Point.  He was an amazing and talented carpenter that took pride in his work and shared his knowledge and work ethic with his co-workers.  Sal was very humble and selfless, always taking time to lend an ear and share encouraging words to family, friends, and co-workers.  He remodeled his home, basically from the ground up with his love and you can see his work and personal touches all around.  Sal enjoyed flowers, birds, landscaping, and art.

A Celebration of Life will be held on a later date.  In lieu of flowers, the family requests you consider planting a tree and/or flowers in Salvador’s memory.